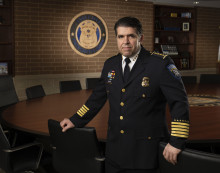 In January of 2023, Robert Shelide started his 37th year in law enforcement and his ninth as Chief of Police for Shelby Township.  He began his career with the Detroit Police Department, stationed at the 7th Precinct (Mack Avenue) from 1987 to 1994.  He was mentored by Lieutenant Russ Bolia who he stays in contact with to this day.  Chief Shelide has made it public, “if it wasn’t for Lt. Bolia looking out for me and guiding me, I probably would be in a different profession.”  During that time, then Officer Shelide made over 550 felony arrests and was awarded a departmental citation in recognition of valiant service performed in the line of duty.  He was also awarded six citations, over 40 commendation certificates, and was selected as the 7th Precinct Patrol Officer of the Month for April 1990.

In February of 1994, then Officer Shelide was hired by the Southfield Police Department.  During his tenure in Southfield, he worked with and for great people who mentored him and developed his leadership skills and the concepts of Crime Prevention and Community Policing.  His experiences and relationships from the Detroit P.D. and Southfield P.D. provided him with the skillset and leadership abilities to be considered for the Chief of Police position with the Charter Township of Shelby.

Chief Shelide was hired by the Charter Township of Shelby on January 12, 2015.  Chief Shelide has made professionalism by his staff a mandate.  Starting with providing cutting-edge training and equipment, the officers are prepared to handle high-risk situations, but also understand the necessity of providing our residents and our business owners with great service.  In each year he has been in charge, Chief Shelide has overseen the department's $17 million+ budget, coming in "under budget" each of those years.  In addition, the department has paid out zero dollars in lawsuits and has vigorously defended itself in litigation.

Chief Shelide has a Bachelor's degree in community development with a concentration in public administration from Central Michigan University and has a graduate certificate of achievement in criminal justice from the University of Virginia.  Chief Shelide is also a graduate of the Northwestern University School of Police Staff and Command (session #285) and the FBI National Academy in Quantico, Virginia (session #253).