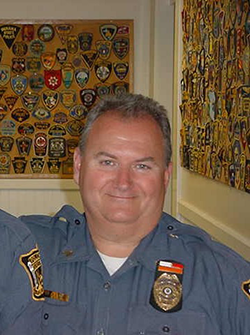 CMPD Sergeant William Alvarez #517, End of Watch on 11/14/2005
ALVAREZ, William – of Cape May, passed away on November 14, 2005. William “Bill” Alvarez was born and raised in the Levittown, PA area and has been a Cape May resident for 21 years. Sergeant Alvarez was permanently appointed to the Cape May Police Department in 1986, after serving as a Special Law Enforcement Officer and a Dispatcher. In addition to numerous Life-Saving ribbons during his career and his dedication, zeal and enthusiasm for Law Enforcement, Sergeant Alvarez was recognized by his own Police Department for his volunteer work during the holiday season in which he started and coordinated the annual Police Department Christmas Toy Drive for disadvantaged children in the area. He also worked with the Cape May P.A.L. Program. Sgt. Alvarez was a member of the Board of Trustee’s of the Cape Island Baptist Church, an instructor at the Cape May County Police Academy and was the owner and operator of Bill’s Lawn Service. He is survived by his father, Eugene P. Alvarez; his wife Sarah (Deshusses) Alvarez and his five children, William Alvarez, Jr. of Norfolk, VA, Katherine Alvarez of Greenville, SC, Chelsea, Joshua and Christian; and grandson Gavin Lombardo. He is also survived by his 9 brothers and sisters: Rosellen Muniak, of Cape May; Regina Pruna, of Cape May; Eugene ALvarez, Jr., of Cincinnati, OH; Mary Beth Alvarez, of Philadelphia, PA; Joseph Alvarez, of Cape May; Francis Alvarez, of FL; Terese Mitchum, of Cold Spring; John Alvarez, of Cape May; and Paul Alvarez, of Smithville. 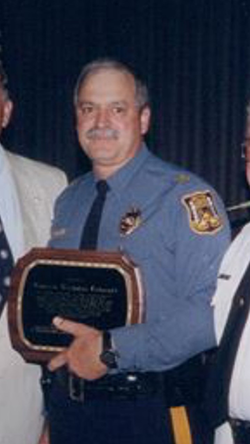 CMPD Captain Nicholas Fedoroff #513 (retired), 07/10/1949 – 02/19/2015
FEDOROFF, Nicholas M. – 65, of Cape May, passed away on February 19, 2015 at home surrounded by family and friends. He was born on July 10, 1949 in Chester, PA and grew up in Twin Oaks, PA. He graduated from St. James HS, Chester in 1967 and the University of Wisconsin Superior in 1971. He started his career with the Cape May Police Department as a Summer Officer in 1972 and became a full-time officer in December. He worked his way up the ranks from Patrolman to Detective, Detective Sergeant and Captain. His partners were Bob Boyd and Diane Sorantino. He retired after 26 years of service. After retirement he worked part-time with his best friend Ed Doyle at Ed’s company, CSERT, as a safety officer. He worked on the Athos, Calcasieu and Deepwater Horizon spills. This work led to his part-time employment at Northstar Marine working on the oil spill recovery boat, the Lynn Frink.
Nick is dearly missed by his loving family which includes his wife of 42 years, Sandy; his son, Kent; sister, Anne (Stanley) Poleck; brother, Francis (and Stephanie) Fedoroff; extended family and many friends.
He enjoyed traveling with Sandy, sporting clay shooting with his friend & partner Diane Sorantino, boat building and woodworking. He and Kent shared a love of sports. Nick was an active member of the Cape May Kiwanis and Past President of PBA Local 59. Nick will always be remembered as one of the “good guys”. 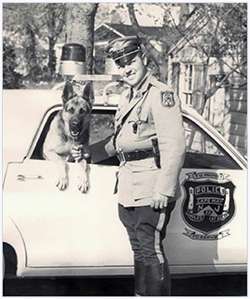 CMPD Sergeant Nicholas Gallaccio #510 (retired), 11/03/1944 – 04/27/2016
GALLACCIO, Nicholas William – 71, of Cape May, passed away peacefully surrounded by his family at Cape Regional Medical Center on April 27, 2016. Nicholas was a graduate of Wildwood Catholic High School, Class of 1962. After 27 years of service, he retired from the City of Cape May Police Department as a Sergeant and former K-9 handler. During his career, he was the Range Master for the Cape May County Police Academy and continued in this role after his retirement. Nick enjoyed spending his time with friends and family fishing, golfing, and hunting. He was an avid sports fan, who spent many years coaching his sons along with local children in Little League. Recently, he has enjoyed watching his grandson play baseball as well as spending time with his four grandpuppies. He is preceded in death by his brother, Peter, and his K-9 partner, “Buster”. He will be missed by his children, Nicholas, Anne Laskey (Todd) and Peter; his partner of 22 years, Sylvia Cooper and step daughter Melissa Cooper (Lauren); his grandchildren Micayla and Ryan; his sister Frances G. Miller (Thomas) and loving nieces and nephews. 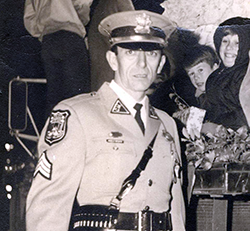 CMPD Lieutenant Angelo Infanto #518 (retired), 02/18/2017
INFANTO, Angelo – 85, of Cape May, Retired CMPD Lieutenant and former Mayor of Cape May City, passed away at his home on Saturday, February 18, 2017. A man of honor, Angelo proudly served in the United States Coast Guard during the Korean War. He served the City of Cape May in many capacities. He was a life member of the Cape May Volunteer Fire Co.; a distinguished police officer for the City of Cape May, retiring as Lieutenant; served on many city government councils and was a former Mayor of Cape May City. Throughout his life, Angelo was always eager to help friends and strangers alike with an unmatched level of energy, genuine kindness and enthusiasm. He had received many awards and citations for his selfless nature and his active involvement in the Cape May Community. During his younger years he organized and managed the Roller Skating Program through the City of Cape May at Convention Hall and was a terrific roller skater himself. He was a member of the Corinthian Yacht Club of Cape May; the American Legion Harry Snyder Post 193, Cape May; VFW Peterson Little Post 386, Cape May and was a devoted member of Our Lady Star of the Sea Church, Cape May where he was also a member of the 4th Degree Knights of Columbus, St. Mary’s Council. Angelo was a loving husband to his wife Eleanore for 59 years prior to her passing in 2012. He is also predeceased by brothers and sisters. Angelo is dearly missed by his family which includes his two sons, Angelo, Jr. (and Jill) Infanto and William (and Villa) Infanto; sister, Nancy Lewicki; three grandchildren, Cheyenne (and Frank) Vargas, Angelo Infanto and Samantha Infanto; four great grandchildren, Allen, Triniti, Kloe and Maxx.

85 years young, of Cape May, went home to be with God on April 16th 2018 with his loving family at his side. Ralph was born on Eldredge Avenue in West Cape May and moved to York Avenue prior to graduating from Cape May High School in 1951. He enlisted in the US Air Force during the Korean War and served in the Strategic Air Command (SAC). He met the love of his life, Barbara Kelly, on Washington Street in Cape May. Ralph said “she felt sorry for me so she married me.” They married in October 1954. Ralph was a Cape May City Lifeguard and is in the Lifeguard Hall of Fame. Ralph worked at the Magnesite Plant where he had wonderful times with many friends including George Rea, Sr. and Vernon (Skippy) Hoffman. Upon leaving the Magnesite Plant, Ralph began his career in law enforcement, serving in the Cape May Police Department with distinction for 30 years. He was a K-9 officer for fifteen of these years. Ralph was also president of the New Jersey K-9 Association; the first president of the United States Police Canine Association and president of PBA Local 59. Upon retirement from the Cape May Police, Ralph served as a Cape May County Freeholder for 8 years. Ralph was a member of the West Cape May Volunteer Fire Company; Cape May Kiwanis Club; Cape May Masonic Lodge and was a 50 year member of the Lower Township Elementary School Board. He leaves behind his loving wife of 63 ½ years, Barbara; three loving children, Sonny (Cathy), Jeffery and Barbara. He also leaves behind his golf partner, work partner and son-in-law, Anthony Marino; grandchildren, Alex Marino, Camille and Ethan Bakley and one great grandchild. Ralph will be missed by many people including the Wawa coffee-clutch and his golfing buddies.