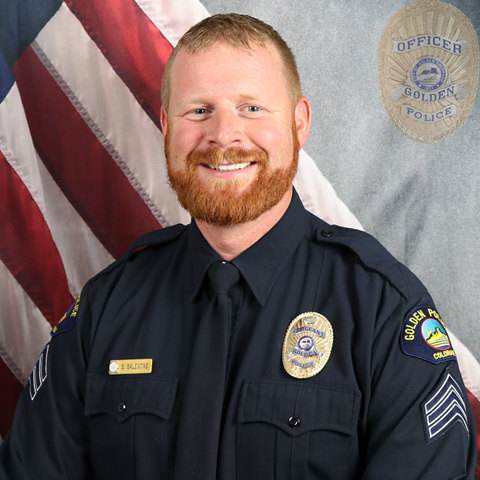 Ben originates from Wisconsin where he attended the University of Wisconsin-Milwaukee before joining the U.S. Army in 2004.  After being assigned to the 4th Infantry Brigade Combat Team at Fort Carson Colorado, Ben was deployed in support of Operation Enduring Freedom in Eastern Afghanistan along the Pakistan border.  He held multiple leadership assignments within the military and completed his service as a Captain (O-3) assigned to a Light Reconnaissance unit before moving back to Wisconsin.  While in Wisconsin, Ben worked in the private sector specializing in Operations Management.

Seeking a career change back to a service-based field, Ben returned to Colorado and joined the Jefferson County Sheriff's Office before being hired by the Golden Police Department in 2016.  While serving in Golden, Ben has been a multi-disciplinary instructor and was promoted to Sergeant in 2018.  He currently is in charge of the Professional Standards Unit which includes Accreditation, Training, Public Information, and Internal Investigations.

Ben has been married for 15 years and he and his wife have one son.  In his time off he enjoys spending time in the outdoors, traveling, and spending time with family.

The Golden Police Department is committed to providing quality law enforcement to the citizens and visitors of Golden.

Compliment a Member of the Police Department or Report a Complaint

HOW DO I COMPLIMENT A DEPARTMENT MEMBER?

We encourage your feedback when officers or other department members perform their duties in an exemplary manner.

All members of the Golden Police Department are involved with the public, at some level, on a daily basis. The involvement varies on a daily basis. Because it is all part of the job, good deeds often go unrecognized.

Encouraging comments from the public are certain morale boosters for the individual department members. These comments also help supervisors recognize those employees that are consistently doing their job well. These employees become role models within the department.

To make the process as convenient as possible, compliments may be filed in several different ways:

HOW DO I MAKE A COMPLAINT?

To make the process as convenient as possible, complaints may be filed in several different ways:

In any complaint, it is important to include as much information as possible that may aid in the investigation. This includes the name of the department member, the type of incident, as well as the location, date and time of occurrence if known. A report number or ticket number are also helpful. Please also include your address and phone number so that you can be contacted if additional questions arise.

What happens after a complaint is made?

The investigation may take up to thirty days to complete, or the process could take additional time in extreme or complicated cases. Your patience and cooperation are appreciated, as our goal is to reach a truthful accounting of facts on which to base our decisions.

If a complaint is substantiated, the department will take corrective action.

The Golden Police Department will accept complaints from any source. Persons who make a complaint will be treated fairly and courteously.

The Golden Police Department and its members are accountable for the manner in which they provide services to citizens. The Professional Standards Unit serves as a means for the public to file legitimate complaints.

It is a criminal offense to knowingly make a false report to law enforcement authorities. The Golden Police Department will initiate appropriate legal action in cases involving intentional false reporting.