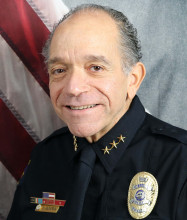 Chief Kilpatrick has 42 years of progressive law enforcement, leadership and management experience.  He was appointed Chief of Police in 2002.  He has a Bachelor’s Degree in Criminal Justice from Northeastern University in Boston. He has a Master’s Degree in Public Administration from the University of Denver as well as a law degree from the same institution. He is admitted to practice law in the State of Colorado.

Chief Kilpatrick was involved with the establishment of Crisis Intervention Training in Jefferson County which began in 2002. He also was a member of the original stakeholder group for crisis treatment through the Mental Health Association of Colorado which hoped to establish triage centers in the metro area.  That project ultimately became what is now known as Colorado Crisis Services which provides emergency mental health, suicide, and substance abuse treatment services through an 800 hotline. He served for several years on its Board of Directors.

Chief Kilpatrick also serves as one of two law enforcement representatives on the Colorado Commission on Criminal and Juvenile Justice which is addressing issues related to the criminal justice system.

Read a Message From the Chief