Over Labor Day weekend in 2020, 38% of traffic fatalities involved a driver who had been drinking. The choice is simple: If you’re drinking, don’t drive

During the Labor Day holiday, including the end of summertime and the busy Labor Day weekend, the U.S. Department of Transportation’s National Highway Traffic Safety Administration (NHTSA) is working alongside the law enforcement community in Hillsboro to decrease impaired driving. From August 19 through September 5, Hillsboro Police will be participating in the Drive Sober or Get Pulled Over enforcement period. In support of the law enforcement community’s dedication to protecting the lives of residents in

their communities, you’ll see officers working together during this time to take drunk drivers off the roads. No matter how you plan to celebrate the end of the season this year, make sure you plan it safely.

According to the U.S. Department of Transportation’s National Highway Traffic Safety Administration (NHTSA), 11,654 people were killed in motor vehicle crashes in 2020 that involved an alcohol-impaired driver. On average, more than 10,000 people were killed each year from 2016 to 2020, and one person was killed in a drunk-driving crash every 45 minutes in 2020. This is why the Hillsboro Police Department is working together with NHTSA to remind drivers that drunk driving is not only illegal, it is a matter of life and death. As you head out to festivities during the end of summer and Labor Day weekend, remember: Drive Sober or Get Pulled Over.

“We want our community members to understand that it’s our first priority to keep people safe, so we’re asking everyone to plan ahead if they know they’ll be out drinking,” said Lieutenant Parsons. “We need commitment from our community members that they’ll keep the streets free of drunk drivers so that everyone can have a safe summertime and Labor Day holiday. This is an awareness effort to get the message out that drunk driving is illegal and it takes lives. Let’s make this a partnership between law enforcement and drivers: Help us protect the community and put an end to this senseless behavior,” he said.

The Hillsboro Police Department and NHTSA are reminding citizens of the many resources available to get them home safely. “Drunk driving is not acceptable behavior, especially when there are so many safe alternatives to get you home safely,” said Lieutenant Parsons. 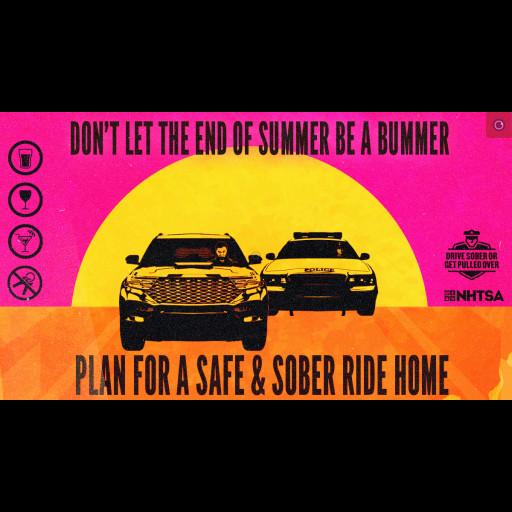