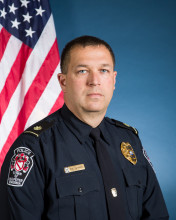 The Chief of Police, Acting Chief Chris Settle, is the commanding officer of the Department and provides efficient and effective police services to the residents and visitors of the Town of Culpeper. The Acting Chief is responsible for the planning and direction of all Department activities and is the final authority in all matters of policy, operations, and discipline. Acting Chief Settle also oversees the agency’s the Support Division and the Body-Worn Camera Program. The Support Division includes Police Administration and Records Center. They provide support services to the Chief, Operations Division, and Investigations Division. They handle record management, record requests, logistics, department grants, policy maintenance, and fleet management, among other areas. They are also responsible for produces internal and external publications such as the Annual Report.

Acting Chief Settle has been with the Town of Culpeper Police Department since 1997 when he started as a Police Officer. He is a life-long resident of Culpeper and graduate from Culpeper County High School in 1992. He obtained his Bachelor’s of Science Degree in Criminal Justice from Radford University in 1997. Acting Chief Settle also complete post-graduate programs through the Virginia Chiefs of Police Foundation, to include the Institute on Leadership in Changing Times at Virginia Tech University, and the Professional Executive Leadership School at University of Richmond’s school of Business. Acting Chief Settle also attended the Virginia Department of Forensic Science Academy in 2003 in Richmond, Virginia. 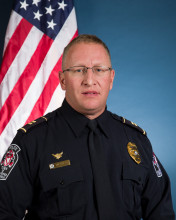 Captain Tim Chilton oversees the Operations Division and the Narcan Program. The Operations Division encompasses Patrol Operations, Community Policing, and Investigations. These divisions are responsible for answering all regular calls for service, investigating major crimes and criminal trends, and targeted investigations of criminal activity. They are also responsible for community outreach, public education, special events, and Public Information. This division also encompasses the seasonal park attendants and the Analyst/Investigation Support.

Captain Chilton has been with the Town of Culpeper Police Department since 1997 as a patrolman. After rising through the ranks as a sergeant and lieutenant, in 2015 he became the Operations Captain. Captain Chilton has served as a task force officer with the DEA, ATF, and the Virginia State Police. He was instrumental in forming the Culpeper Police Department’s Street Crimes Task Force and has served as the Emergency Response Team Commander.

Captain Chilton is a board member to several regional outreach groups that focus on drug addiction and homelessness. He is a graduate of the Professional Executive Leadership School at the University of Richmond, The Institute for Leadership in Changing Times at Virginia Tech, and the FBI-LEEDA Trilogy of leadership. Captain Chilton has received numerous commendations from Stafford County Sheriff’s Office, Fauquier County Sheriff’s Office, and the Culpeper Police Department. In 2003, Captain Chilton was named in a Virginia State Senate Resolution in recognition for his efforts as a member of the Virginia State Police Blue Ridge Narcotics and Gang Task Force.