Thanksgiving is right around the corner. For many of us, this means traveling to spend the holiday with friends and family, near and far. So, I want to remind everyone that no matter how far you’re driving this Thanksgiving—whether it’s down the road to a friend’s house, across town to pick up a pumpkin pie, or hundreds of miles to see a favorite relative—you could be involved in a crash. And if you or anyone in your vehicle are not wearing your seat belts, you’re at a much greater risk of being killed. During the Thanksgiving holiday weekend in 2020 (6 p.m. on Wednesday, November 25, to 5:59 a.m. on Monday, November 30), there were 333 passenger vehicle occupants killed in traffic crashes across the nation. More than half (52%) were unrestrained.  It’s a sad statistic, but even more sad, is that many of those deaths could have been prevented with one simple click of a seat belt.

During the 2020, Thanksgiving holiday period, more than four times as many drivers involved in fatal crashes were Alcohol or Drug- Impaired. It’s illegal to drive when impaired by Alcohol, Drugs, and Cannabis (Marihuana), yet in 2020, one person was killed every 45 minutes in an alcohol / drug related crash on our nation’s roads.  Although consumption of Cannabis is now legal in NYS, operating a motor vehicle under the influence of cannabis is still illegal and carries the same criminal sanctions as operating a motor vehicle while under the influence of alcohol or drugs.

Saugerties Police is once again joining safety advocates nationwide to spread the message about the importance of seat belt use; and the dangers of consuming Alcohol, Drugs or Cannabis prior to operating a motor vehicle.  Most Americans know of at least one person who’s been killed in a crash, but too many people are still lying to themselves, thinking it couldn’t happen to them.

Keeping our roadways safe and free of impaired drivers continues to be a high priority for Saugerties Police. That is why we will adding additional DWI patrols throughout this Thanksgiving holiday and weekend.  Officers will take a zero-tolerance approach to anyone who chooses to drive while impaired by cannabis, drugs or alcohol.

Surviving your Thanksgiving drive this year — and making it to next Thanksgiving — can be as simple as buckling up and using a designated driver. I would like to publicly thank SPD officers who will be taking time away from their families this Thanksgiving to safeguard our community. 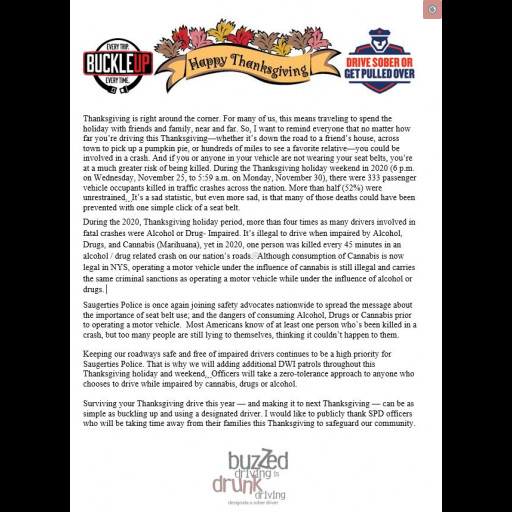